Josephine "Joey" Eliot was an associate of the Second Inspector. She was played by English actress Suzanna Leigh during Seasons 5-6.

A perfectly ordinary and unremarkable girl from the Sixties' Swinging London, Joey joined the Inspector and Aiden after she was accidentally transported to the 26th century by the spacetime experiments of the chrono-scientists at Hypercube W1K.

Remembered as the kindest of the Inspector's associates, Joey deeply influenced the literally heartless Infinity Knight. Her innate human sympathy gradually softened his often callous personality during their encounters with the Crütonnes, the Sulphur Soldiers, the Circuit-Chaps, and the Infinite Cyclorama.

At the Infinity Knight High Command's inquiry against the Inspector in the conclusion to the serial "The Crime Sports", she successfully appealed to them to allow her and Aiden to retain their memories of their adventures with the Inspector before being returned to their own time streams. 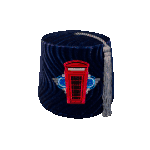